The researchers suggested that this represents a process of “neural commitment,” in which the infant brain wires itself to understand one language and its sounds.

In contrast, the bilingual infants followed a different developmental trajectory. At 6 to 9 months, they did not detect differences in phonetic sounds in either language, but when they were older — 10 to 12 months — they were able to discriminate sounds in both.

“What the study demonstrates is that the variability in bilingual babies’ experience keeps them open,” said Dr. Patricia Kuhl, co-director of the Institute for Learning and Brain Sciences at the University of Washington and one of the authors of the study. “They do not show the perceptual narrowing as soon as monolingual babies do. It’s another piece of evidence that what you experience shapes the brain.”

The learning of language — and the effects on the brain of the language we hear — may begin even earlier than 6 months of age."

The article also discusses and debunks the older notion that growing up bilingual confuses infants and children when it comes to language use. Well-worth a peek at this article!
Posted by Montessori House at 2:21 PM 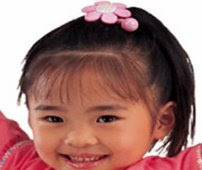